A very quick bit first – I’ve have a small number of Xmas Bauble kits for a couple of months, and finally decided to put one of them to some use.  This is a blank that I made for another pen, then changed my mind and realised I wanted to go a different way with it.  It’s a nice blank that took a bit of work and a few experiments to get right and I didn’t want to waste it.
Quite pleased with it 🙂 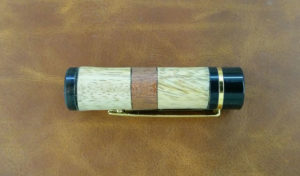 For the last 3? 4? weeks I’ve been working on a special pen.  It seems like forever, and I’m constantly being thwarted with problems.  One of the big ones is that while inserting the tube into one of the early blanks for the cap, it got stuck halfway in.  Thinking it wouldn’t be much of an issue I cut it at the end and glued it in the other end.
Well, that blank ended up failing so I had to cut it off the tube(s). That was already the second attempt in wood, so I gave it up as I had an idea in resin.
The first resin attempt worked but it was a small blank and when I drilled it out the hole was too close to one side. I made it again and all went well – when the brass tubes were inserted they left a gap of about 2mm inside, but that wasn’t a problem, was it?
Yep, apparently it was.  When applying to the pressure to insert the end cap and clip, then the screw end, that 2mm gap close up and buckled the resin as it was only a couple of mm thick itself. Another failure to cut off the tubes… but in disassembling it I managed to crack the end off the screw end.  Not a problem – that’s hidden inside the tube when it’s made.

By this morning I had decided to do that pen onto a different kit.  I’m out of resin so can’t do anything yet, so decided to create something different from that pen. Using wood measured so the tubes touched inside would be ok for pressing together so I went for that.
This blank turned out really nice – with my new Mango Wood for the main body and Sapele for the ring, it went together really nice and was enjoyable to cut down.  I’m experimenting with new wood finishes and that also went great with this one.
But again, assembling the kit pieces turned out to be a pain, and the screw end that had previously cracked just wouldn’t go in properly which seemed to be caused by the trim ring.  In trying to disassemble it, the whole blank snapped where the tubes come together.  That was it, finito. No more.

Nah, I couldn’t let it beat me. Glued the blank back together, back onto the lathe, re-sanded, polished and finished.  Final assembly attempt (without the ring) and it just wouldn’t do it. I ended up trying a bit ham-fistedly by this point and the screw part of the tube fitting is knackered. That’s it. There’s nothing I can do to salvage it now – while it still looks quite nice, it’s useless. (Look carefully where the plastic meets the wood on the left).

But thankfully I can put that to bed now and stop messing with it.  I’ve learned quite a bit about what you can and can’t do, and when to cut your losses.  I should have learned it 2 weeks ago 🙂

I picked up a nice piece of Mango Wood last week and this weekend I’ve had the chance to cut it down into blanks and play with it.
Here’s the first pen – a nice slimline, polish finished with wax to give it a very satiny look and feel.