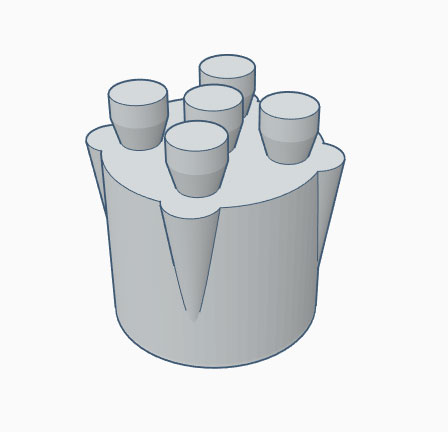 SATURN V IS BACK ON!
I’ve been playing with some finer settings on my 3D printer, and think that maybe the Saturn V pen idea is worth  visit. As I type (11:20 25/10/20) I’m trying a print of the rocket base.
Because of the layer lines in 3D prints, I didn’t think I was going to get a decent enough result from this printer and it would need to stay shelved until I can afford / justify a resing printer….. but I’ve just had a play about with settings and have it printing layers a LOT thinner than I’ve played with previously. Fingers crossed!
(If it still doesn’t quite work, I’ve got a printer nozzle that is .2mm, so half of the current size.  It means some painful playing with printer settings if I have to go down that route, but again increases the quality.)

The Italian Job – I’ve dismantled the Mini. It obviously needs the paint stripped, but I think I’d like to find someone local who can sandblast it clean instead of going through the messiness of using paint stripper.

Camera Dolly – I’m quite excited about this one.  I’ve tested the parts, and they were generally very close fits.  A little re-design was needed, parts re-printed and a quick test using the drill attached to the threaded bar showed the idea itself will work.
The problem is the pitch of the thread is so tight that movement is going to be painfully slow.  I’ve ordered some Z-Rod for 3D printers to use instead which should be much better.
Yes, I’ll have to do more redesign but it’ll be worth it.
I’m using the same basic Arduino idea that I used in the cup rotator, but I’ve had some help on the code to let me run 2 motors together from the board. (Yes, my Arduino programming is that basic!) I’ve uploaded the program, but had to order some circuit board to allow me to distribute the power between the Arduino and 2 motors without burning the Arduino out.