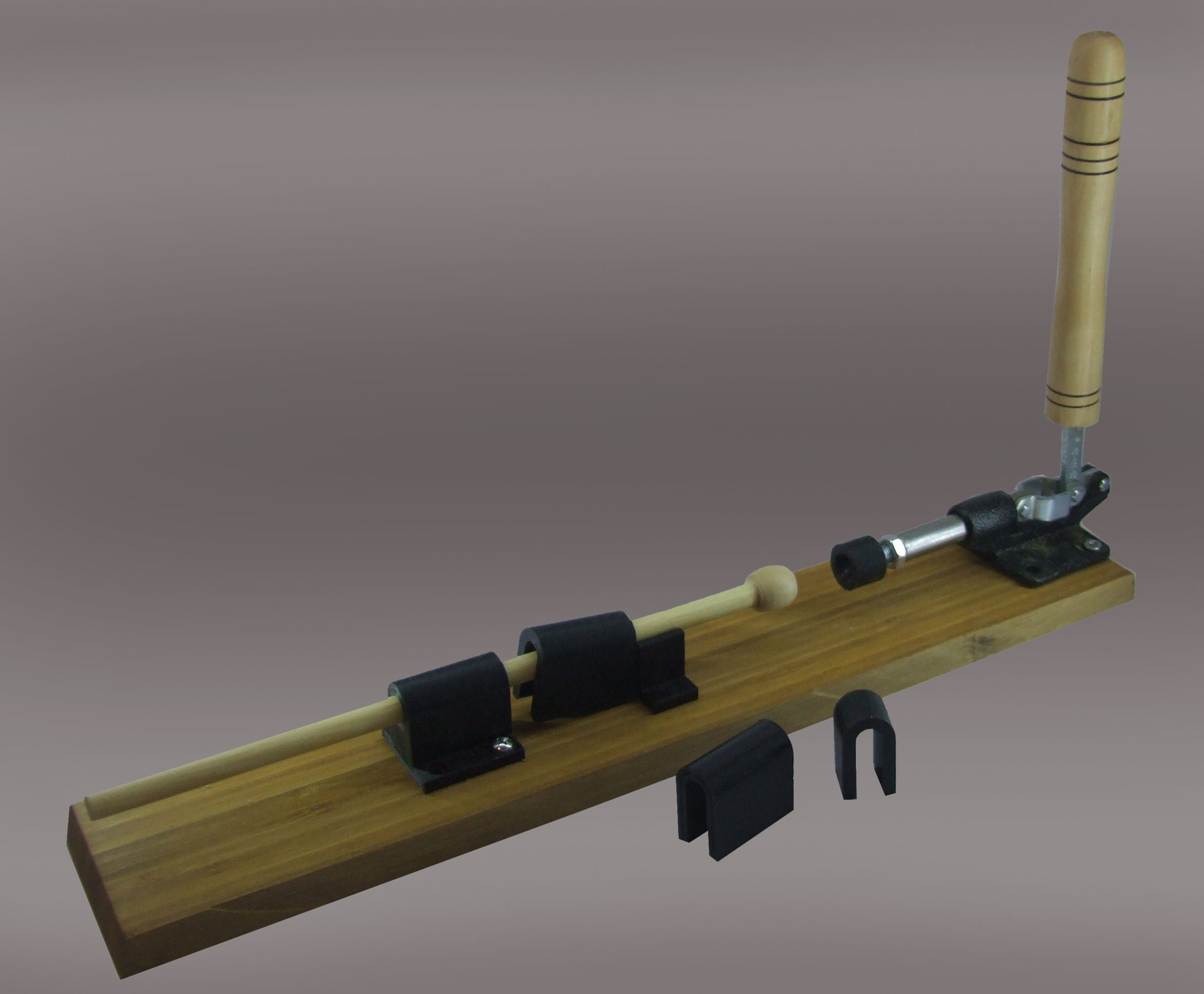 Not much time in the cellar this weekend – yesterday was spent helping the eldest daughter move into a new place, and today I’ve working on the blank for a friend that has been bugging me for a while.  The main problem with it is that it’s quiet important that the hole gets drilled perfectly down the middle – even doing it on the lathe I’ve had a few non-starters with that, so I’m currently printing a jig for a drill guide that I’ve found that I bought a few years back and never used.

The picture today is a pen press – when making pen kits, you literally press the hardware into the tubes. I’ve previously been using the jaws of my Workmate because I’ve been too stingy to pay £50 or so for a proper pen press.  Well, with some hardcore printing, a toggle clamp from ebay and some wood I’ve made one of my own.  The handle is turned on the lathe with guitar string used to burn the lines in, and the base is some nice solid chopping board.  The rod is a 10mm bamboo knitting needle.

If I get the chance (and inclination!) I’ll upload a video sometime of it in use. 🙂

This is a pen I made last year – it’s a hair scrunchie set in white resin.  The photo really does it justice, as it doesn’t show the imperfections in the pen – I added some glitter but it was too sparse and the colour was too harsh and wrong for the pen.  The white colouring I used had dried bits in it which made it into the mould and ended up as white dots.  I really wasn’t that happy with it, and it never made it onto the Pens For Sale page for that reason.

The pen making world goes through fashions just like everything else.  Someone comes up with a new idea, it gets copied like wildfire and suddenly everyone is doing it.  One of the latest things is giraffe pattern pens.  Not to be left out, I printed a mould mould (a 3D printed mould to make a silicone mould), made the silicone mould, then cast the blank. It wasn’t great, I didn’t seal off the bottom of the blank enough so the colour I used to fill the white sections leaked out through the bottom leaving the level of resin about 3mm too short.  Doesn’t sound much, but it makes for a bit of size difference in a 20mm blank.
Anyways, back to the scrunchie pen – today I finally got sick of it, popped it onto the lathe and stripped it back down to the tubes. Cut down and drilled out the giraffe blank, popped the tubes in and started re-doing it.  Nope, not my day today! The cap blank ended up being too thin to be of any use and the resin chipped off the end of BOTH of them – lost the piece for the cap one, found the body one and glued it on only for it to chip off in the same place again. I sanded it down and turned it around to the good side just to get a picture where it looked ok, but then stripped both of them off the blanks again.

Let’s see what I come up with next….