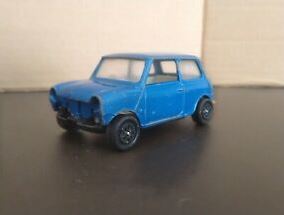 Wow, so yet again I’ve taken ages to do an update on here. Sorry guys…. hold on, does anyone actually come here and read my drivel anyways?!?

Well, if you do, I’ve got a few ideas and projects lined up / started!

I’ve recently bought some moulds for resin casting Pandora style charms, and the silver centres.  At the moment I’m still in the early experiment phase, but want to try putting things like pet hair into them for keepsakes.

No, not a real one.  As much as it would be nice to have another one, it’s too expensive to buy one that doesn’t need work, and I don’t have anywhere to store and work on one that does.
So we come to the Mini in the picture – it’s a standard Corgi model which is in poor shape.  It’s the same as the ones that I’ve got a few of already, but I want to try a resin casting project and didn’t want to sacrifice one of my existing ones.

I know as a rule I’m not very forthcoming with project details before they start – but considering very few people will read this, it’s a good place to pop my personal notes on it.
The model needs work – especially that front grill. It just needs one that is in place visually, it doesn’t have to fix in like a proper model one, so I’m going to create a mould from one of my existing models and cast a new one in resin. It’ll need the paint stripped off and repainted, then I’ve still got some waterslide decal paper hanging around somewhere to made the bonnet stripes and turn it into an Italian Job Mini.
The gaps around the wheels will be filled in, probably with UV resin (resin which hardens under UV light) just to make it airtight / watertight.
Using a small pop bottle I’ll cast some black resin around the outside of it to make the inside of a tube (can you see where I’m going with this yet? 🙂 ). A smaller stream of blue resin will be cast on the inside of the bottle.  With the bottle removed, the outer pipe will be on its side, with the stream place in the bottom.
The Mini will then be on an angle coming out of the water (with a few UV resin splashes, hopefully) and then filled with clear resin around it (probably using the inside of another pop bottle).
This can then be turned to clean it up and polished to recreate the famous Italian Job escape scene.

I’ve got some Seirra style pen kits on order.

Most of the cast pen blanks I have sitting around are the size for this style of pen, but it’s also about the most popular pen for people putting images into the body.  It would be nice to create some pens with people’s Mini pictures in them, and it someone wants to actually part with cold, hard cash for me doing so, well I won’t be arguing 🙂

Yes, I’m trying to get back into doing pens.  Since the move, I now have most things set up again and I’m currently in the middle of a coconut wood one which last week was a pain and split while turning.

I got some new kits in January which are a bit posher and really nice, but didn’t realise I didn’t have the right bushings for them until last week.  I’ve now got those. Let’s just see how this goes.

Since getting the slightly bigger 3D printer over 2½ years ago, the original one (Ender 2) hasn’t seen a lot of use.
I toyed with putting a laser on it at one point, and created a cradle for the laser head which made it’s way onto Thingiverse and I think a couple of people have tried out.  Because this used modified 3D print files, it kept the 3D printer as it was with the original board etc.
Stupidly I used a laser head from my little Neje laser – that runs at 5v. The 3D printer puts outs 12v, which means I burned the laser out.
I decided to use it as an opportunity to revamp the whole thing, and replaced the 3D printer board with a popular development board called Arduino, which now has a motor controller board attached. I took the 3D print head off, bought a slightly higher power laser and 3D printed a cradle for it to sit in instead of the print head.
Frankly, I jumped into it too quick and didn’t understand what the heck I was doing. I had several disappointing hours trying to configure it and ended up falling out with it for a few months and since moving it’s sat rather broodingly on the shelf.
Recently I did some more research and got hold of a much better program for the computer side of it, and I’m actually now in the position of having it up and running with some successful test prints.
I need to design some sort of jig to print on round/cylindrical objects, but I see a bright future for it.

I’ve got a project in mind called Project Phoenix, which will involve laser-cut wood veneers. That’s quite an intensive project, so that one IS under wraps for now 🙂

I think that’s it for now.  Let’s see if I can try to keep this updated again, huh?

A couple of weeks? Again? Already?