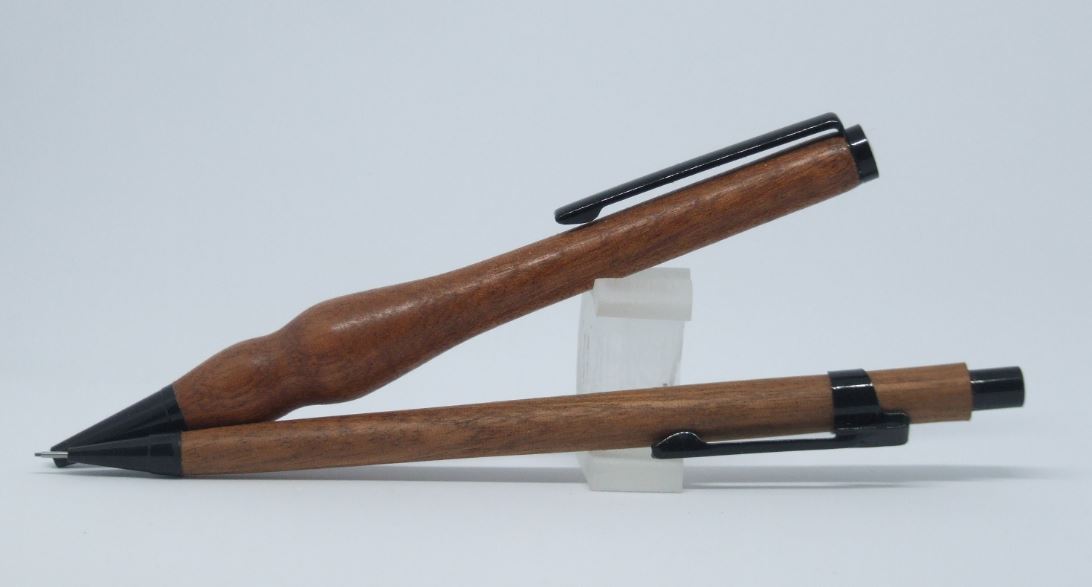 You’ve seen plenty of my slimline pens where the kit is made as-is with the centre band in place.
There’s an alternative way to make them where the body is a single unit without the centre band, which I quite like personally.
This week I bought the longer drill bits that are necessary to be able to make them, as you’re drilling right through the full length in one go.

Making them is a little more complex than a normal slimline – after marking the length required you don’t cut them down and drill them on the drill press.  Using a chuck to hold it on the lathe you use a long drill bit in the tailstock to drill through the length and cut it to length while on the lathe.  The tube for the clip gets glued into place as normal, but the lower tube just pushes in and sits there.  You pop it on the lathe and then turn as normal.

When assembling, you take the lower tube by itself and press the front piece into it, followed by the twist mechanism in the top end. The ink is inserted, then the whole lower section pushed into place without gluing – this allows it to be removed for replacing the ink.  The endcap and clip are then pressed into the top and it’s finished!

The first one I made was the red and blue swirl one below; I’ve had the blank for a while and just haven’t found the right project for it until now.
I’m quite happy with the way it came out.

Next came making one from wood.  In my box I found I had a couple of the black hardware sets, and remembered doing the mechanical pencil some time ago in Sapele – that also had black hardware and is a long, slim one piece.
Picking out another blank of Sapele, it drilled out nicely and turned down well also – as the top was quite narrow to match the pencil style, I gave it a nice bit of support for holding at the bottom.  Sanded down, cleaned and buffed with Yorkshire Grit, I finished it with my new friction polish mixture.
Fully assembled, it looks great as a set with the pencil! 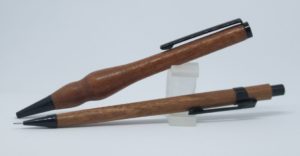 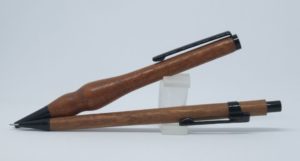 Coffin for the Vampire Hunter Kit