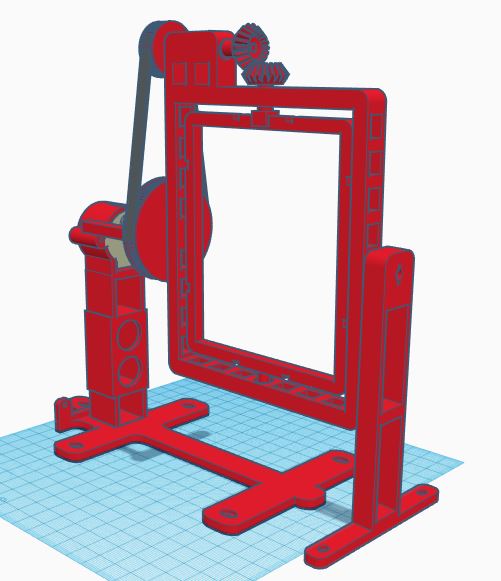 I’ve managed to finish the prototype Rotoframe, and it actually works!
Ok, it’s a little jumpy at 2 places in the revolution, but it turns the way it should.  The outer frame rotates, with the inner frame rotating at 2 times the speed in the opposite axis – like a gyroscope.
What’s it all for , and why am I going to such effort?
Well, I have an ultimate aim of something to try – I haven’t seen it anywhere else yet, on YouTube or in facebook groups – so either it doesn’t work, or no-one has tried it yet.  I find that hard to believe, but live in hope!
That’s why I’m not going to reveal the exact goal on here – I know I don’t get many of you reading this drivel, but just in case someone gets the idea and is quicker/more determined than me, I’m keeping it to myself for now 🙂
However, it has got something to do with making a hollow resin shell – which is where this all comes in.
You put a little resin into the mould, pop it into the middle of the frame (I’m using elastic bands to hold it) and set it going.  The resin sets quite slowly, so the rotoframe turns it through each plane as it sets so that it coats the inside of the mould with a thin layer as it cures. This should result in a hollow object.
As you can see from the video the first one is a bit jumpy. I’ve spent today re-designing it so I can use some little bearings which should make it all a bit smoother.  That new version is printing now.
Wish me luck !