A pen that hasn’t made it into the website is the one I keep for my personal use.  I can’t sell it – when I made it I made a mistake and it ended up being out of true, with the wood meeting the metal tip section being slightly out of line. A friend at work wanted to buy it, so I’ve re-made it. In case you can’t guess it’s the thicker Walnut one with the black and white accents.  See the steps in making it in the “Making Of” section!
The other is also a custom pen based on the one currently for sale but with a Stylus kit rather than the rose gold slimline. It’s a little while since I made the original one, so took a couple of attempts to remember what I’d used to make the blank.  They never turn out the same twice, and this one has more pink and a brighter blue – good job the new owner likes pink! (The picture actually shows it a little more shocking pink than it actually is.) 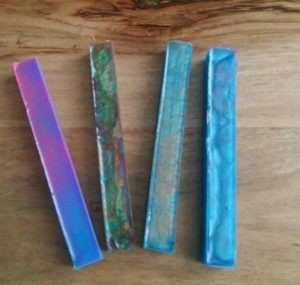 The left hand blank is the one used – the right hand two were me getting it completely wrong before I remembered what I’d used, and the 2nd from left is a Christmassy blank.
I went to make a pen from this one today, but it chipped.  Even though it glued back in with no problems it’s left a crack showing.  Also, it seems I didn’t use a strong enough concentration of powder so it’s a little translucent.  I’m calling it a fail, and will be stripping it off the tubes. 🙁

Oh, I’ve also added two new pens for sale – both in the Euro style, one is a nice red/black swirl and the other is Acacia wood with a subtle gloss French polish finish.

Playing with a new toy!