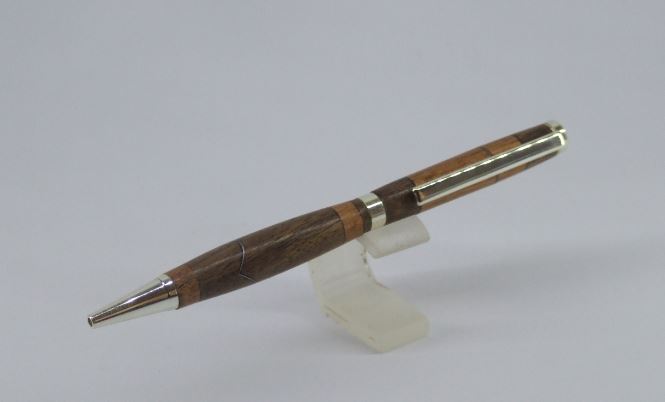 Yet again I seem to have left it a couple of weeks.  I’ve been busy casting a new pinecone blank, making a cup turner for resin (more on that below) and this pen – Make from contrasting woods (Black Walnut and a wood from a selection pack that was listed as Kiaya, but I can’t seem to find that wood on Google) and some metal trim as per the detail pics.
To get the rounded ‘V’ metal shape I used a 3D printed jig for my bandsaw which lets me cut perfect 45° angles. I carefully marked the halway point down the vertical axis of the blank, cut from one side down to my mark, then the same from the other side to split the blank in two with the V.  A thin sheet of metal is then prepared with glue and placed between the 2 pieces as they are pushed back together in a clamp, bending the metal and gluing it in place in one go. 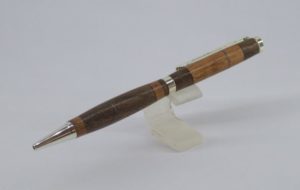 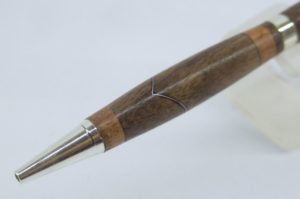 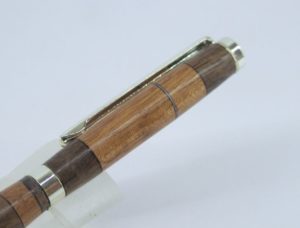 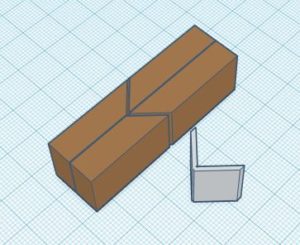 Sometimes when browsing the internet, Pinterest or my Facebook groups I get an idea into my head of something that I want to try in the future, and this usually ends up in me buying something.  One thing that’s really caught my interest lately is resin-coated travel mugs – there’s some great designs out there!
The way it’s done though, is that the mug is coated in resin and then turned very slowly while the resin dries to give it an even coating.  You can buy little motorised machines which turn the cup at around 2-5rpm but they’re not so cheap for what they are, especially just to try it out.
While I was playing around with putting new software into my 3D printers a couple of years ago now, I bought two little Arduino computer units.  These are little computer boards that you can plug other things onto (like motors, sensors etc) and then you connect them to your computer and put the programs into them which they then sit and run themselves.  For a couple of quid I bought a little stepper motor and controller board, then connected it up to one of these Arduino’s and programmed it to turn the motor at 2 rpm.
I then measured up all of the pieces and designed a holder for them, a little connector for the motor to hold a length of bamboo and a Magic Sponge.  The first design (printed in red) was more of a test to make sure my measurements were right. The second (with modifications to the base) was functional, but looked a bit strange and was a little unsteady.  It also had an extra join in the tower where I wasn’t sure of the height and so made the column and the motor holder in 2 pieces (that way if it was wrong, I didn’t have to reprint it all). The third one (in black) is much more the finished item – it has an extra length for stability when it’s free standing, but also mounting holes to screw it down.  The motor column is one piece too and a much neater design.  I have a 4th and final version planned which will just include an adaptation of the motor mount so I don’t have to pull all the electronics apart when moving them from one assembly to another, and another outrig for even better stability without needing to screw it down.
When assembled it certainly does the job!  Now to buy a couple of cheap travel mugs and start playing! 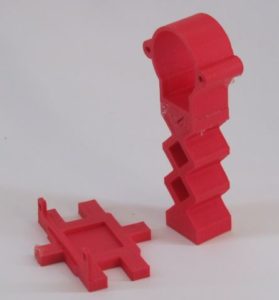 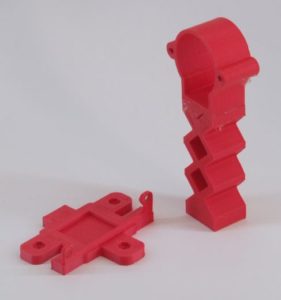 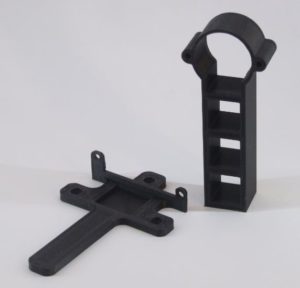 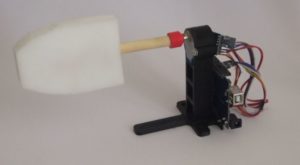 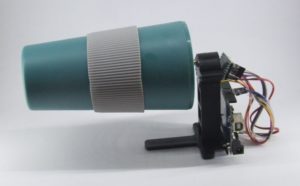 Pen Press and stripping it back